A new idea of light
to celebrate births

In Rome, the lights of Piazza del Popolo celebrate the city’s newborns. For a moment, the public lighting system blends with art. Here is how the project was developed.

When strolling through Piazza del Popolo, with the street lights on, the atmosphere is always warm, even on a cool evening in Fall.
For a moment, you look down and see a slab with these words. 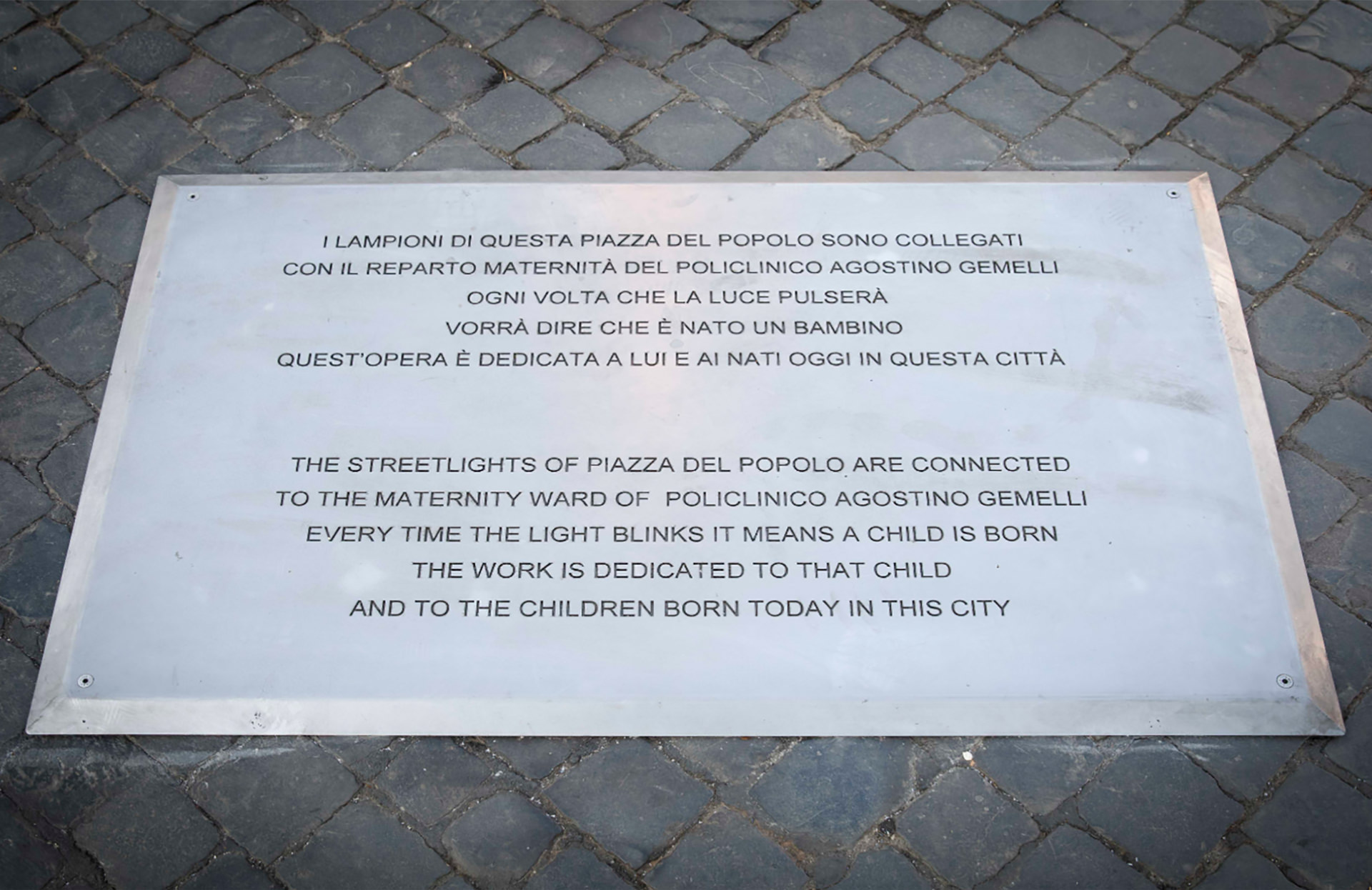 “The street lights in Piazza del Popolo are linked with the maternity ward of the Agostino Gemelli General Hospital. Every time the light pulsates, it will mean that a baby has been born. This work is dedicated to him or her and to all the other babies born in this city today."

When you look up towards the sky again, you can see the lights of the 16 lampposts in the square flicker for a few seconds in perfect harmony, then suddenly return to their normal intensity.
A pulsation. A heartbeat. A baby has been born.
Acea has worked for 9 months (an odd coincidence!) to deliver Garutti’s brainchild.

“Seeing it live during the inauguration was an extremely emotional experience. It’s a source of great satisfaction for the entire work group.” says Cristina Scudetti, Public Lighting Planning Manager for Acea. Ai nati oggi (To those born today) is the work of artist Alberto Garutti, supported by the MAXXI foundation as part of the collective exhibition “La strada. Dove si crea il mondo” (The street. Where the world is created.” curated by Hou Hanru. The installation is promoted by the Municipality of Rome and planned, built and maintained by Acea, which manages the capital’s public lighting system.

“The initial challenge was to enter his perspective, so that we could be sure to remain as faithful as possible to the original idea” explains Cristina. The artist wanted to simulate the pulsations of a beating heart by turning the lights on and off. “But this gave rise to two problems. Our public lighting systems are not designed to incorporate a dimming function, that is, the light intensity cannot be regulated and, in pedestrian areas such as Piazza del Popolo, the standards in force do not allow the lighting flows to be dimmed, or turned off completely during the night.”

To create the work, the lighting elements installed in the square had to be "emptied" and fitted with an independent control system that could be monitored by the Acea technicians using a dedicated web page.
The led lamps were then connected to control devices, connected online via wi-fi. This means that the lighting system in Piazza del Popolo can dialog via web with a tablet installed on the other side of the city, in the maternity ward of the Gemelli General Hospital: just one touch and in a few seconds, the input reaches the led lamps in the street lights.

“We then had a series of meetings with the artist and our technicians to test the system that we were making and agree on every aspect of the final result together: dimming level, duration, speed of the reduction and increase in the light intensity. "To ensure compliance with the standards, we calibrated the system so that the intensity of the lighting on the ground never goes lower than the minimum set levels." 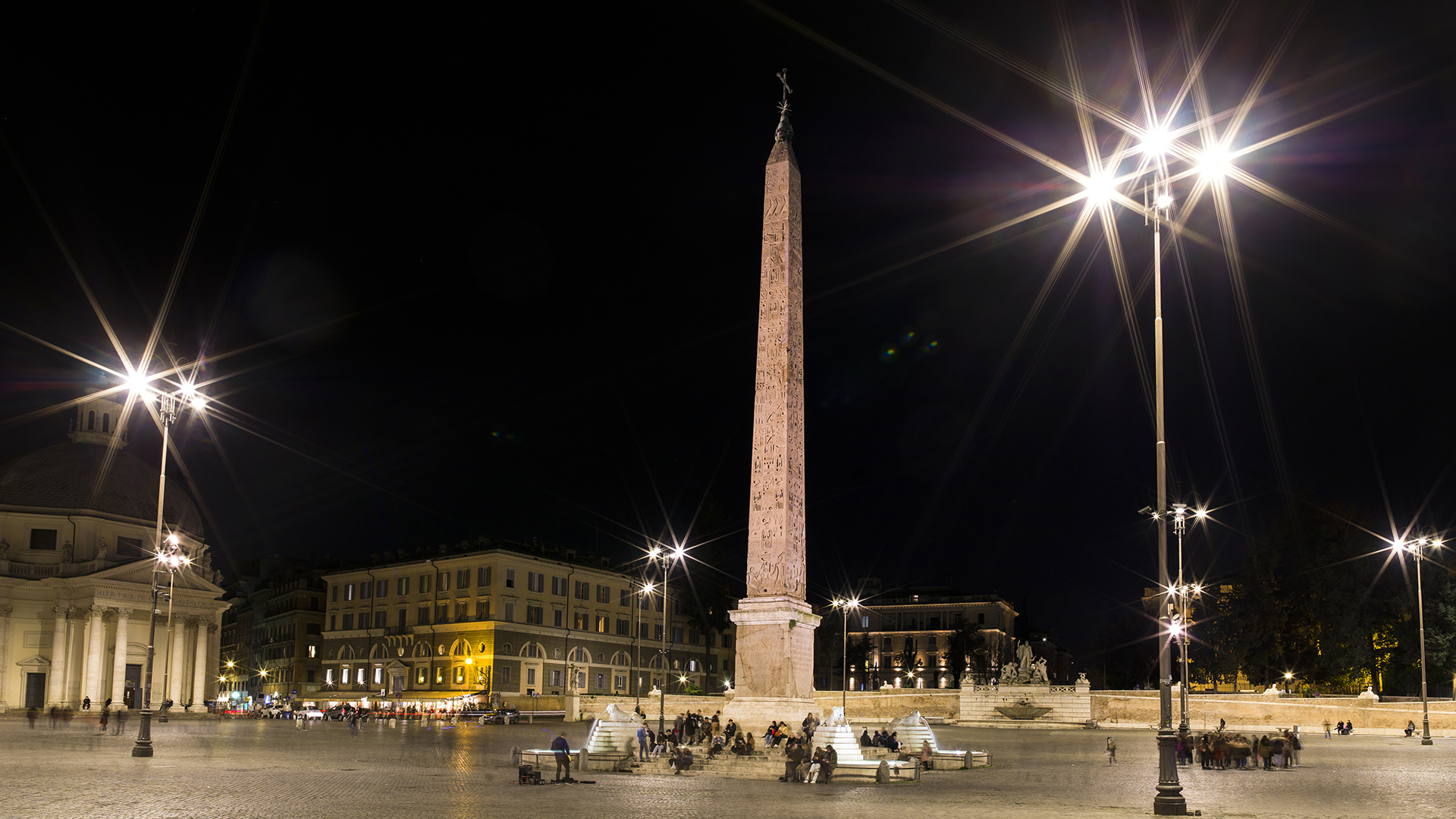 A long, complicated project, that involved specialized teams in every phase: design, installation, maintenance, tele-control. All because, for the first time in Acea, a functional lighting system was used for artistic purposes: in this way two different ways of conceiving and designing lighting were integrated. “Even if, for us, we only ever have one goal: to ensure the quality of our lighting” explains Cristina.

Ai nati oggi, for Acea, was a successful opportunity to experiment with new solutions: from the wireless control of the system to the management of the dimming function that enables the intensity of the light to be calibrated at any time. “Solutions that we are also capable of applying to the new lighting designs we are working on in Rome” explains Cristina.
“If you happen to spend an evening in Piazza del Popolo, stop for a moment and wait for the light to pulsate. It’s definitely worth it.”

Usually, when it comes to artistic illumination projects, the concepts created by Acea are designed by its in-house team of lighting designers. But participating in independent projects with great artists, some of international fame, is not an exception. For example, Acea worked on a very profitable joint project with Oscar winner Vittorio Storaro and his daughter Francesca, who designed the lighting systems for the Imperial Fora and the Column of the Immaculate Conception.

Lighting up the beauty of Rome 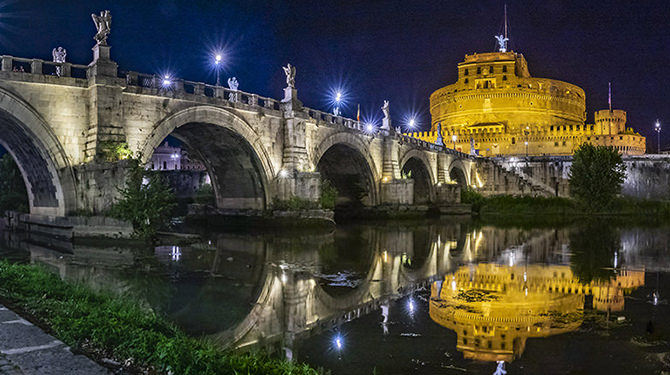 For years we have been illuminating the most valuable heritage we know of:
Rome’s monuments.